Inheriting all the subtle changes of the ’14 Durangos, this one looks just that little bit better. 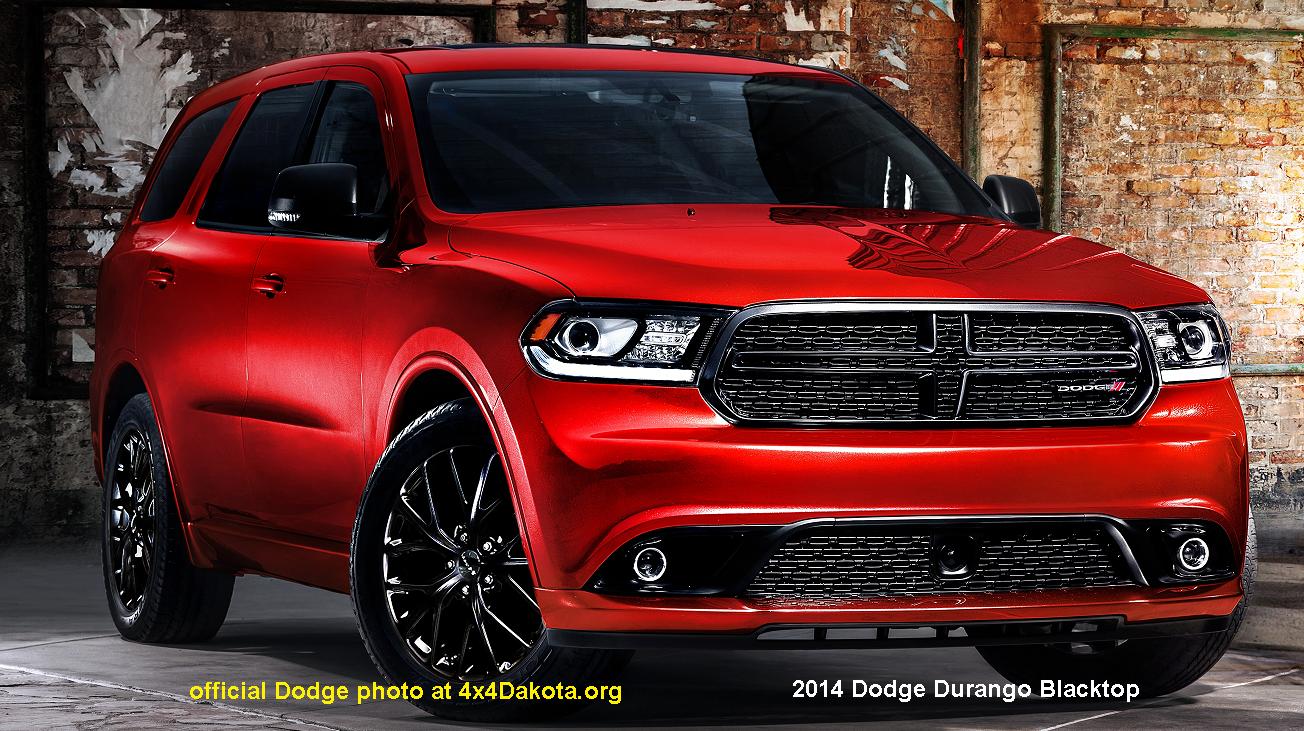 August 7, 2014 , Auburn Hills, Mich. – Dodge is rounding out its offering of Blacktop Packages for 2014, adding the three-row Durango to the lineup of Dodge vehicles with the sporty, sinister look. With the addition of Durango, the Dodge brand now offers the Blacktop Appearance Package on seven of its 2014 model year vehicles, including Charger, Challenger, Dart, Avenger, Journey and Grand Caravan.

“The rear-wheel-drive based Dodge Durango is already one of a kind. It stands out as the Charger of the three-row SUV segment,” said Tim Kuniskis, President and CEO – Dodge Brand and SRT Brand, Chrysler Group LLC. “Now with Blacktop Package, customers can make it even more unique, and it’s customized by the factory.”

Through July, Dodge Durango sales in 2014 were up 13 percent, compared with the same period in 2013. Durango has achieved 19 consecutive months of year-over-year retail sales increases.

The 2014 Dodge Durango Blacktop will start arriving at dealerships in October.

Now Dodge is adding the Blacktop Package to the Durango SXT, Limited and R/T models, adding even more aggression to the already sporty appearance. The Blacktop Appearance Package gives customers the opportunity to customize their Durango straight from the factory at a tremendous value.

On Limited models, the Blacktop Package includes all of the above content, plus HID headlamps and LED daytime running lights (DRLs), to complement its premium leather interior, for a starting U.S. MSRP of $1,990.

The Dodge Durango SXT Blacktop and Limited Blacktop feature Durango’s standard 3.6-liter Pentastar V-6 engine and dual exhaust with active intake, paired with the new standard eight-speed automatic transmission and generates an impressive 295 horsepower and 260 lb.-ft. of torque, and can tow up to a best-in-class 6,200 pounds. The V-6 powered Durango also features a best-in-class driving range of more than 600 miles on a tank and up to 25 miles per gallon.

The Dodge Durango R/T Blacktop features a standard 5.7-liter HEMI V-8 engine that produces a best-in-class 360 horsepower and 390 lb.-ft. of torque with a best-in-class tow rating of 7,400 pounds. The 5.7-liter engine’s Fuel Saver Technology with cylinder-deactivation seamlessly alternates between smooth, high-fuel-economy four-cylinder mode when less power is needed and V-8 mode when more power is in demand. Models with the HEMI V-8 engine achieve up to 23 miles per gallon.

With standard seven-passenger seating and luxurious second-row captain’s chairs available on all models, the seats in the 2014 Dodge Durango can be converted to as many as 50 different configurations.

Families with three or more children will find the Durango’s available captain’s chairs with pass-through especially helpful as two car seats can stay latched into the second row seats, and there’s still easy pass-through for passengers to walk between to get to the third row. The second-row captain’s chairs will also make adults feel like they are riding in first-class, with available Nappa Leather heated bucket seats with individual armrests.

The Durango’s new instrument panel features a redesigned center stack that houses the 8.4-inch Uconnect touchscreen. The bottom of the center stack houses a new media hub with an SD card slot, USB outlet and auxiliary jacks, as well as a storage bin. The new center console features a new segment-first rotary shifter for the standard eight-speed automatic that adds another level of refinement over the traditional gated automatic shifter. Manual shift functions have moved to paddle shifters on the back of the Durango’s new steering wheel.